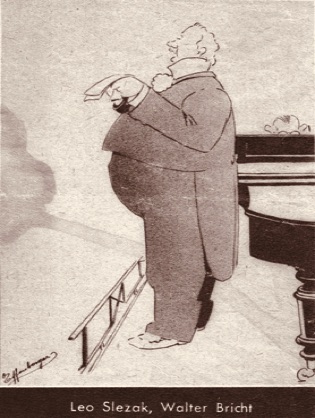 Walter Bricht was well known as piano soloist, chamber-musician and accompanist, appearing in performances worldwide. He trained at the Vienna Academy, graduating with diplomas with highest honors in composition, conducting and piano. He was introduced to Viennese audiences as a boy, accompanying his mother, the famed singer Agnes Pyllemann. Reviews from this period described his exceptional talent and sensitivity as accompanist.

In addition to teaching counterpoint, composition and form at the Vienna Conservatory, Bricht taught master-classes in piano at the Horak-Schulen in Vienna, and also was an instructor at the Mozarteum in Salzburg. He became well-known as a chamber musician and accompanist, appearing with many notable soloists, including Leo Slezak, Hilde Konetzni, Yehudi Menuhin, Ossy Renardy, Erica Morini, Arnold Rose, Felix Galimir, Gregor Piategorsky, Oscar Natzka, Frederick Buxbaum and many others. A more detailed list is located on a promotional brochure, created soon after his arrival in the United States.

In the United States, Bricht continued solo recitals, accompanying and coaching. He was members of the faculties of the Indiana University, and the Mason College of Music. He made regular trips to Music Mountain, CT and played chamber music with members of the Gordon String Quartet, later to become the Berkshire Quartet.

Reviewers described Bricht's playing as having a "clean, singing tone", with "shapely phrasing" and "a lush orchestral sound."  His musicianship was defined as both distinguished and outstanding. In chamber music performances, he was described as a "real musical leader."  For your enjoyment, here is a recording of a live performance of Schubert's Trout Quintet, fourth movement with the Berkshire Quartet.